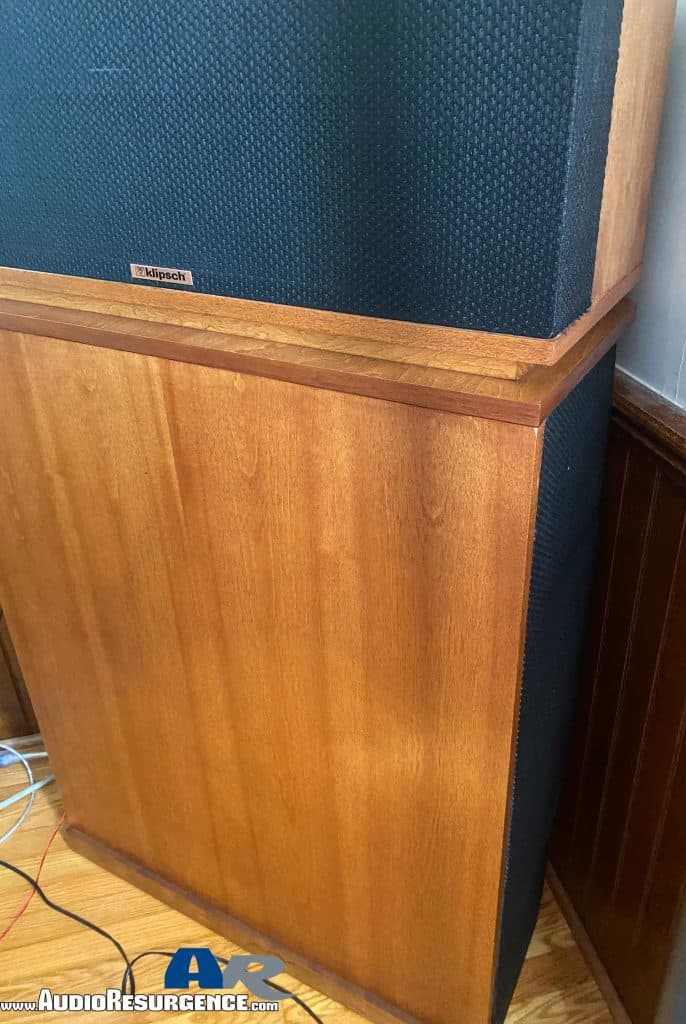 Klipsch Heritage speakers seem to be all the rage at the moment. I’m seeing the Klipschorn, La Scala, Cornwalls, Forte, and Heresy speaker models being snapped up rapidly on the used markets, and Klipsch has just announced a 15% price increase on all Heritage speaker models, no doubt to cash in on the high demand. I’m not really one to jump on the latest trend, I still wear flared jeans and drive a Dodge station wagon, so much for fashion. But I’m almost embarrassed to say that as someone who’s been around this hobby for over 40 years, and who runs a (modest) reviewing website, I didn’t get to hear my first set of Klipsch speakers until around 3 months ago when I stumbled upon a nice pair of Heresy I at a used record store in VA. I snagged the Heresy for a fair price and again, to my embarrassment, it took me over a month to get around to hooking them up. Driving the Heresy with my trusted Thor Audio TPA-60 monoblocks I was pleasantly surprised at what I heard coming through them. They sounded big, dynamic, had plenty of soundstage depth and width, had a nice tonality, and mostly got out of the way of the music. They did sound a tad harsh on complex music, perhaps a little ‘nasally’, but for $300 it was hard to find serious fault.

The Heresy I came and went, enough about them pleased me so I set about finding a more modern pair of Klipsch Heritage series, looking around for a deal on a Forte or perhaps even the Cornwall. To accelerate the process I placed a local Craigslist ad, and after a few weeks, up popped a chap just 30 minutes from my home with a set of mint 1993 Klipschorns.

Wrestling these buggers out of his second-floor music room was no easy task, but thankfully they do allow for easy separation of top and bottom sections, making moving them a 4-step process instead of 2, but ultimately more manageable. 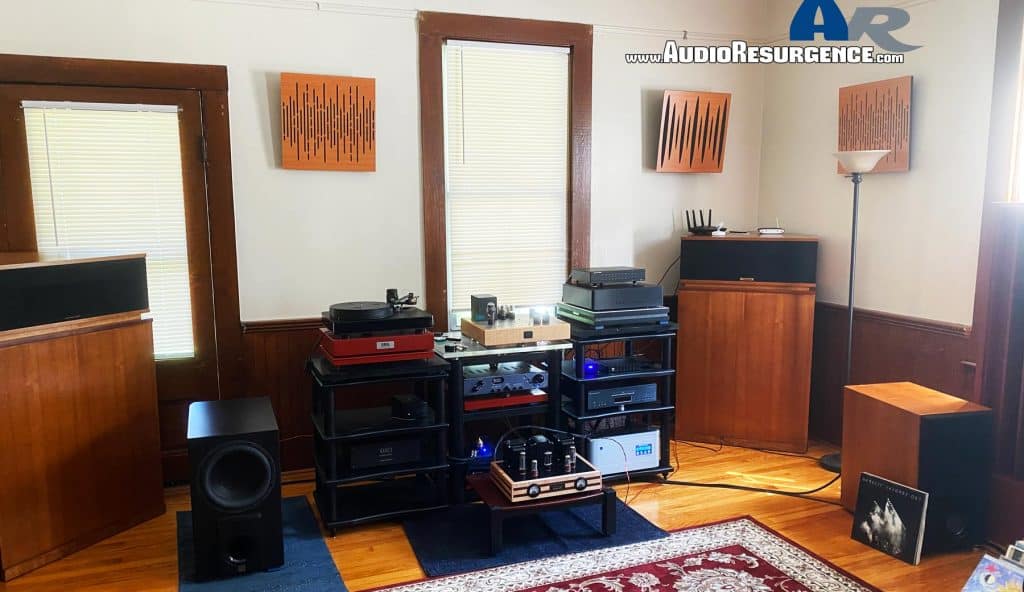 The K-horns are designed to fit tightly into the corners of the long wall, where the adjoining sidewalls become an extension of the bass horn itself. Thusly placed in the corners of a 16′ wall, the speakers cross at a point around 4 feet in front of the listening position, which is 15.5′ from the front wall behind the speakers. Moving the seat forward so that the cross point becomes closer changes the sound quite significantly. I preferred to sit at the 15.5′ mark as this provided a more accurate tonal balance, albeit with a little less bass solidity.

When placing the speakers into corners it’s important to have the tight against the wall and to have several feet of clear wall space to both sides of each speaker. If you have a base-board or other impediment to flush-fitting tight against the wall, then there will be some detriment to bass performance. In such cases, the manufacturer has provided blueprints for a ‘false corner’ panel, which can be constructed and placed between the walls and the speaker, essentially become bass ‘wings’ or an extended bass baffle. Other people have simply enclosed the back and sides of their K-Horns, supposedly to good effect.

How do the Klipschorns sound?

I have the Khorns set up in a room that is probably a little too small for them. The room is roughly 16′ x 17′ x 8.5′ and the speakers are in the corners of the short wall. Regardless of this room constraint, the Klipschorns sound quite spectacular. Adjectives that come to mind include dynamic, effortless, and powerful. They throw a fairly accurate soundstage with a good sense of scale and image placement. They do not throw laser-focused images in the way that a small monitor speaker does, but the images they do present are more believable, more life-like, and more accurate than those portrayed via a smaller dynamic speaker. Soundstage depth may well be a function of room geometry and associated equipment, wrt the Klipschorns. They have less front-to-back stage depth than some of the more conventional dynamic speakers I’ve used, hence there isn’t the same degree of soundstage layering. This may be a function of the room geometry or a design constraint of this specific speaker, I don’t have the experience with Klipschorns to say one way or another.

The Klipschorns possess fine timbral properties, they remind me in some strange way of a more fleshed-out Quad ESL57, whose tone and timbre are legendary. But they do not have the transparency of a Quad, that see-through quality is nowhere to be seen.

Their main strength comes from an unrivaled dynamic realism that persists even at higher SPLs where other speakers I’ve owned will drive the room into an audible frenzy. However, the K-Horn’s composure at concert volume levels is somewhat dependant on the type of music you play through them. I spent many hours in one particular listening session bouncing around my 6TB music collection on my SonicTransporter i5, UltraRendu, Denafrips Gaia, and Denafrips Terminator front-end. Later I switched to vinyl and played through some old favorites from Pink Floyd, Genesis, and Queen. Here’s what struck me – playing Seconds Out on vinyl, the Genesis live recording from the 70s, featuring Collins/Bruford on drums and percussion, the sound was the very best I’ve heard from any home-based music system. The scale and sense of dynamic realism were staggering! (OK, I’d had a couple of G&Ts at this point). Where I’d come to think that the Klispchorns lacked depth and the ability to layer images front-to-back, the stage seemed to explode open in all directions and appeared to lack nothing. As damn near perfect as I’ve heard. Spinning Dragon Attack from Queen’s ‘The Game’ album on vinyl, same thing. Crank the volume to concert level and the sound was unbelievable for a 3-way speaker system in a small room. No harshness, no compression, just scale, dynamics, and a true-to-life presentation as good as I’ve heard. Yet on more complex music, where the mix demanded that the instrumentation and vocalists be given more space in all 3 dimensions, the illusion was somewhat diminished. In fact, the lack of the speaker’s ability to push front-to-back created a slightly congested sound that was somewhat unpleasant to listen to on a number of tracks.

Shortly after getting the Klipschorns, I was foolish enough to make a post on an ‘Audiophile’ group hosted by Facebook. I don’t know what possessed me to do this, I should’ve known better. There were many negative comments thrown at me relating to peoples’ experience with the K-Horns, and several related to the quality of the bass, where people considered it to be poor. I should remind myself that these ‘trolls’ have probably never heard a K-Horn, and are just spouting whatever comes into their tiny minds, for effect. I actually consider the bass to be quite natural and really very good, both in terms of tonality and timbre. My room really doesn’t do bass, not without a significant leg-up. For that, I use a distributed bass array comprising four strategically placed subwoofers and a miniDSP 2×4 HD. With the K-Horns, I was able to turn down the subwoofer bass such that the input from the subs was barely discernible. In larger rooms, K-Horn users will surely reap the full benefit of the large folded horn design.

In a nutshell, the Klipschorns are one of the most impressive speaker systems I’ve heard, albeit with some flaws that might prove deal-breakers depending largely on your preferred musical tastes and genres. All of the above is written based on using an Aric Audio ‘Special KT88/120 SE amplifier, switching between Triode and Ultralinear modes, and using EL34 output tubes. I’ll experiment more with tube selections in the coming days and weeks and I’ll also throw in the Art Audio Carissa Signature amp that I have arriving later this week. So consider this a fluid review which I’ll update as more information becomes available.

Submit a review or share your experience – we’re always looking for equipment reviews, so if you have something to say about a component, recording, concert or anything pertaining to the world of music or high-end audio, we’d love to hear from you!